Pulling In Front Of A Motorcycle Case 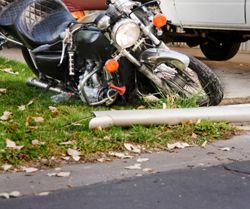 An East Texas physician was traveling cross country on his late model Harley Davidson when an automobile pulled across the roadway and stopped blocking the lane in which the motorcycle was traveling.

This case underscores how important it is for an injured motorcycle rider to hire a motorcycle accident attorney as soon as possible. Because the at-fault driver was killed and the motorcycle rider suffered traumatic amnesia the determination regarding how the accident happened relied almost entirely on other sources of information. Modern motorcycle braking systems are designed to bring a motorcycle to a stop with as little skidding as possible resulting in less information being available regarding the speed and direction of the motorcycle prior to impact. This problem was compounded by the fact that it had just rained resulting in there being even less skid marks than usual. The accident happened on a very busy interstate highway which meant that the limited skid marks would quickly be worn away. Witnesses around accident scenes on interstate highways are highly transient and can be difficult to located after a short period of time. Fortunately, the injured rider hired a Tyler motorcycle accident attorney within a few days of the accident and we were able to located a witness that had stopped to buy gas at a nearby convenience store. The combination of the witness statement, debris pattern, limited skid marks, impact marks on the pavement and damage to the vehicle allowed us to do an accident reconstruction which defeated all of the insurance company’s excuses.

The accident caused permanent damage to the rider's hand and arm which ended his medical career. We made claims against both the negligent driver and the rider's underinsured motorist insurance policy. Through the use of an economist we were able to reach favorable confidential settlements with both defendants.