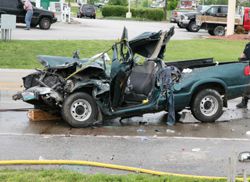 A Tyler area construction contractor was waiting at a stop light when a hopper type fertilizer truck slammed into his truck causing extensive injuries to his back. The fertilizer truck had recently distributed the load of fertilizer onto a hay field and was returning empty to the fertilizer plant for another load.

A light summer ran had wet the pavement and the truck driver failed to allow sufficient distance for the empty truck to stop on the wet street. The truck driver's judgment was impaired by the cocaine that showed up in his post accident urinalysis.

The East Texas fertilizer company at first claimed that they had no knowledge and no responsibility for their driver's illicit drug use and asserted that if they had been aware they would have terminated the driver immediately. The initial discovery revealed no other employee related drug issues. However, a close inspection of the company's quarterly payroll tax returns revealed an number of employees that had not previously been disclosed. An investigation into these newly discovered employees, many of whom were still employed by the company, established that an large number of the employees had previously failed drug screens without any consequences or actions by the company. Discovery further established that when the company hired the fertilizer truck driver they both failed to conduct a pre-employment drug screen and failed to thoroughly check the driver's employment history. A simple check of the at-fault truck driver's work history revealed that he had been fired from his previous employment as a truck driver for failing a drug screen. A substantial confidential settlement followed.

After more than thirty-seven years and thousands of personal injury cases there is virtually nothing that we haven't seen and successfully handled. There is no substitute for experience. If you want the assistance of an experienced Board Certified Personal Injury Attorney in the Tyler / Longview / East Texas area contact us today.