Illegal U-turn In Front Of Motorcycle 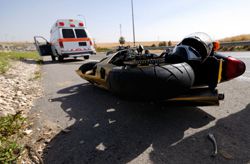 An East Texas artist was riding his pan head Harley Davidson motorcycle in Tyler when a the driver of a passenger van made an illegal u-turn from the right shoulder across three lanes of traffic causing the motorcycle to strike the van squarely in the sliding door on the driver's side. The force of the impact propelled the rider into the interior of the van. Unfortunately the rider's leg was severed at the knee as his body crashed through the van.

After extensive negotiations a confidential settlement was reached which took into consideration the rider's injuries, medical expense, future medical needs and loss of earnings.

After more than thirty-seven years and thousands of personal injury cases there is virtually nothing that we haven't seen and successfully handled. There is no substitute for experience. If you want the assistance of an experienced Board Certified Personal Injury Attorney in the Tyler / Longview / East Texas area contact us today.