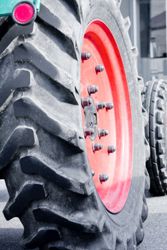 With the help of an American tire expert we x-rayed the tire and were able to show that the bands in the tire were never properly bonded together during the manufacturing process resulting in a weak spot at the point of rupture. Furthermore, through extensive discovery we were able to establish that about two percent of the tires from this manufacturer had manufacturing defects. A substantial confidential settlement resulted.

This case is a good example of an increasingly common situation experienced by American consumers. Similar but inferior foreign made products are becoming common in the American marketplace. Foreign manufacturers such as the Indian tractor tire manufacturer in our case operate in countries with a lower standard of living. Foreign product manufacturers have lower labor costs and lower overall fixed costs. These foreign product manufacturers, particularly those in third world countries, are subject to very little regulation by their governments and can thus cut corners in order to increase their profit margins. They can thus produce a less expensive and similar appearing product that sells well next to its more expensive American made counterpart. Unfortunately, foreign made tires have a higher defect rate and maim and kill far more people than their American competitors.